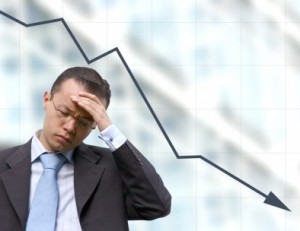 Global Financial Crisis took its origin from USA, in august 2007, when it triggered a collapse of the mortgage market, which prompted the bankruptcy of some biggest banks. The USA government and most governments from the European Union had undertaken some measures, aimed at saving the bank system.

At that moment Republic of Moldova seemed not to be concerned about what was happening in the world, claiming that we had professionalism and stability in our country. Indeed at that time we were not affected by the crisis. It might be explained that we don`t use the same credit system as developed countries do (eg.ABS, CDO).

After one year and two mounths , we started to confront the problem of liquidity, and gradually the demand in the housing market started to decline. This might be explained by the fact that our citizens working abroad had been already affected by the crisis from the country of their employer. In this way it had an impact on mortgage market in Moldova, that led to halting construction activities. These construction companies fell into default and then we started feeling the financial crisis on our skin.

The number of these companies was not so high and a cautious position had been put forward by commercial banks, which was manifested by: deliberate identification of real client who is to be granted a credit, allocated credit resources covered only 40 % of the estimated collateral value (fair market value of assets), compared with 60% granted previously; in order to attract citizens’ savings they were paying a high interest rate, sometimes exaggerated.

Unfavorable situation in the world, political and financial crisis in Moldova led us to determined economic crisis in octombre this year,which had an impact on real sector of national economy (production and consumption of goods and services). I think that this shift from financial to economic crisis represents the second wave of crisis. According to the writer and historian Niall Ferguson, it will bring a lot of negative effects to developing countries and those in the period of transition to market economy and Moldova is not an exception from this.
Initially this effect will be felt by economic entities with a less eficient management and then other companies might follow.

A good example would be the bankrupcy of a well- known company producing brandy “Aroma” and the fact that other three companies with a major state shareholding could be declared insolvent: ” Moldresurse”, “Combinatul de produse alimentare din Bălţi” and society ”National-Vin”. The second example might be the reduction of wages in average by 5 %, that took place in October compared to September 2009 (from 1621 to 1538 lei in agriculture (here, this decline may be caused partially by seansonal factors), from 3224lei to 3073 lei in industrial sector, from 5629lei to 5241lei in banking system).
To better understand how many employed people in Moldova were affected by the economic crisis I propose you to examine the chart, based on statistics data. 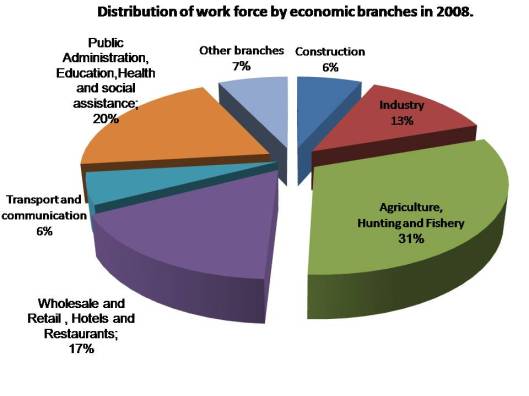 According to the chart displayed above we can conclude that only in October 2009, 45% of employed work force in Moldova suffered from economic crisis.

Another factor that aggravates the economic crisis is the decline of remittances. So if we compare the statistical information, reported by the National Bank of Moldova, regarding remittance flows provided by people working overseas (residents and non) in the first three quarters of 2008 compared to 2009, we can see a negative trend as there was a reduction of 416.68 million dollars.
In other words, one of the most important sources, which directly influences the budget tax revenue, decreased by about half bilion in the period of January-September 2009, compared to the same period of 2008.

Further development of the economic crisis in Moldova is highly dependent on the decisions taken by the present government, and how they can attract external financial resources. (Our economy is highly dependent on foreign financial assistance).
In the context of above, we can conclude that further development of the economic crisis may run after one of two scenarios:

First, if our government manages to attract the financial support promised by Russia, EU, U.S. and China starting from December 2009, we will be able to easily surpass the economic crisis by the end of 2010, although its top point will be attained in March-May 2010.

If they fail to attract financial resources, the second scenario will follow that might deepen economic crisis and later even turn into a social one.
Inability to attract funds may be caused by:
– Failure of presidential elections, which will transform the current government in one provisional. In this way, many of the promised loans would become unaccessible because the potential creditors require certain guarantees and sustainability (sustainable development);
– lack of professionalism of the current leadership in adopting an effective fiscal-budgetary policy for the upcoming year;
-failure of the current government to maintain the level of credibility in relations with donors andforeign creditors.

Social crisis brings about public agitations and protests, finally threatening legal order, and as history repeats, some events of ’29-’33 in Europe could become very authentic for Moldova.

However, I refuse to believe that such events will take place and starting from the maximum “Hope dies last!”, I remain with the idea that the situation will not complicate so much and worries appeared on people’s faces over the last year will turn into smiles and it will create an amiable atmosphere in society.